The Tunaboys’ Wild at Heart Roundup in the Last Frontier 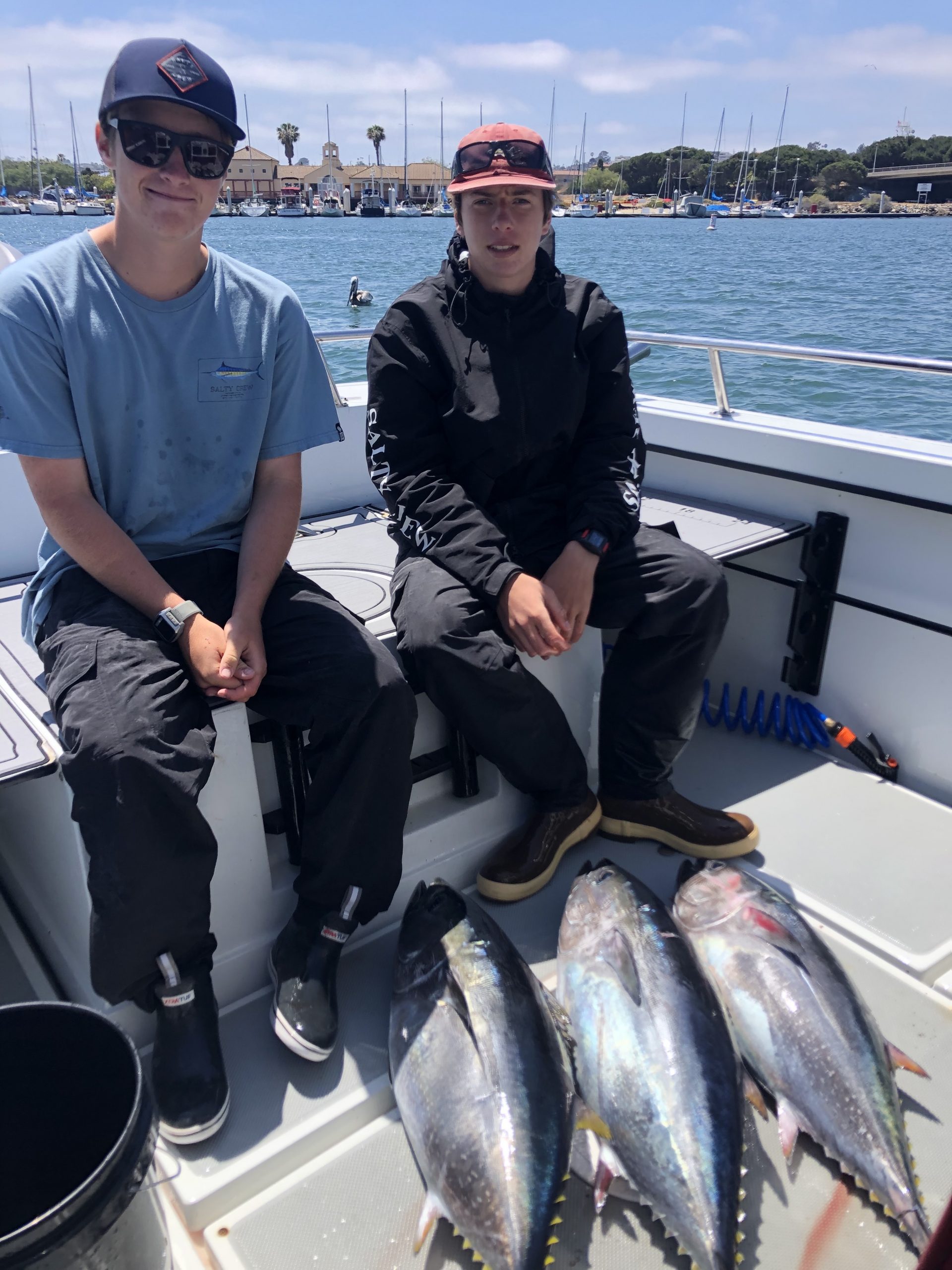 “Come on, Shan. You gotta come out with us…the report looks good.” Dave, my husband said. He’s been wanting to take me Blue Fin Tuna fishing for a long time, but the last time I went out a few years ago, we didn’t see any sea life on our six hour tour, and I rather be doing other productive things than scan the ocean’s horizon all day.

I responded, “I’m good.” I had plenty of to-do’s and rather leave blue fin fishing for the guys. But, I’d be happy to make poke bowls if they caught anything.

Logan and Dillon begged me too, “C’mon, Mom, you’ll love it.”

Ya know, I have a hard time turning my kids down when they ask me to do something. Maybe I take for granted that I’ll be with my husband forever, but I know my kids are growing up and my time with them is more limited–Logan is moving out to college this fall, and Dillon has only two more years before he graduates high school. I agreed to go and resolved to have a good attitude no matter the outcome. It would even be fine if we roamed the open waters all day without seeing any fish.

We started our ocean adventure early. Like cowboys, my rough and tumble guys pulled on their Salty Crew waterproof pants, wore their lucky hats, and pulled on their boots, Xtratuf waterproof. I opted for the mom uniform: black leggings, tank top, hoody, foam baseball hat, and tennis shoes. Once on the boat, Dave connected his favorite Spotify playlist to the blue tooth–the good ‘ole boy country playlist from Luke Combs. It took almost thirty years, but finally, I influenced my husband with my Colorado country town roots.

Dave set the autopilot to his researched spot somewhere in the middle of the ocean, the somethin’, somethin’ Bank at blahbety blah degrees. Our 300 horsepower engine ambled us through the wind-swell troughs. After a little while, we spotted a submarine tower just above the water’s surface; the steel beast moved swiftly creating whitewater waves. Dave turned off the autopilot and drove around the stealthy ship. Wondering if their spy technology could pick up our conversation, I figured I may as well talk about poop and boogers just in case they were listening. We got back on track, and Dave started explaining to me how the autopilot works. Dillon sat beside me in the three-person max cockpit while Logan sat in the open air above us in the Tuna Tower.

“You guys are so annoying,” Dillon complained and left to sit outside by himself. Understandably, it was a little early for conversation, but Dave continued my lesson. I guess if something did happen to Dave, and both our radios went out, and our satellite phone died, and we couldn’t see land, then I’d be in trouble. So, I better pay attention.

After about an hour, we neared our general fishing marker on the chart plotter, and it was time to look for Bird. Not “birds,” as any devout fisher person would know. If we didn’t spot any thin, angular winged white tern birds with our eyes, then Dave would bust out his “gyro bino’s,” gyro stabilizing binoculars. While, the boat rocked and rolled, the binoculars gave a stabilized view of the horizon. To get ready for a fishing frenzy, we rapidly rolled the cabin canvas doors back to allow the area for walk-throughs.

Dillon moved to the bow and pointed, and Logan stomped from above at the considerable flock of low flying Bird far ahead, circling and diving-bombing the water.

Dave poked his head out of the cabin area for a better view, and I walked the rocking route to Dillon as he exclaimed, “Yeah, BIG foamer!”

With excitement, Logan jumped down from the tower.

“See ahead? All that whitewater,” Dillon pointed, “That’s fish jumping–they’re feeding on a huge bait ball.”

Dillon quickly moved to the stern and took his already rigged rod out of the holder. Logan did the same. Immediately, Dave told them he wanted to steer from the Tuna tower above, and he put the boat in neutral, climbed above, and yelled, “I’m heading over there, get ready.”

I could feel the boys’ adrenaline surging. With excitement, I climbed up to join Dave and now had the birds-eye view. It’s bumpier up top, and I held on to the side rails as we galloped through the Wild Western waters to attempt to wrangle these Tuna.

With rods in hand, the boys returned to the bow in anticipation, preparing to cast. We got closer to the frenzied birds squawking their high pitched calls, and a massive circle of bubbling, splashing, turbulent water roared like a raging river. I’d never seen such a sight. Dave told me to watch which direction the fish were moving. He was going to slide in, right in front of the incoming foamer. Then, they’d cast right in the middle of the action.

There were hundreds of Tuna. Some perfectly arched out of the water like the fake piranhas at Disneyland’s Jungle Cruise ride, some flopped high, others splashed and darted. Swiftly approaching, the massive turbulent bubbling blob was now about 50 feet from our boat.

Dave slowed the boat down, and clicked the boat into neutral. We continued to drift toward the fish.

“Get ready, boys,” yelled Dave. The boys waited for Dave’s next signal before they cast out their lines.
Dave assured the boys, “Just wait…here they come.”

The fish dissipated and disappeared below the surface, and Dave jumped down to help the boys.
After a quick fight, Logan’s rod returned to normal, and he said with disappointment, “Oh, shoot, it broke off.”

Dillon’s rod curved down to the water, so he lifted and then reeled the line’s slack causing the rod to bend down again. He pulled up, reeled, lowered-again and again as he moved around the boat directed by the strong fish.

Dave grabbed the gaff, a long pole with a sharp hook on the end. Then he said, “Do ya see color? Let me know when you do.”
After Dillon battled the fish for several minutes, Logan yelled. “Color!” Dave readied his gaff beside Dillon. I saw the light blue of the fish circling near the surface, and it looked big.

I whipped out my phone to take a video, as Dave waited for the right moment to inject the gaff. Then he immersed the hook in the water and pulled up, snagging the fish in the side. He lifted what looked like maybe a thirty pounder. Logan cheered for his brother, and Dillon breathed a sigh of relief. Dave handed the gaff to Dillon for a photo with his fish.

The mighty Blue Fin was beautiful. A dark top and rays of iridescent blue on the sides, with an incredible assortment of fins that allowed fine movements.

After pulling out the gills, the boys filled the fish box with ice and salt water and dropped the fish in. They returned their rods in a holder and looked up searching for more Bird or foamers. Logan pointed and yelled, “Over there!”

Excitedly, Dave launched into gear and we sped to the next foamer.

Within the next couple hours, Logan caught a blue fin a similar size, and Dillon caught another. Eventually, it was time for us to return to the harbor, so we turned up the music and made our way home through the wild blue yonder.